In Part 1 we discussed the premise of this once-popular site. In Part 2 we will take a look at the reality.

Neopets has not aged well.

The fact is, the internet has evolved, and Neopets has not. It remains largely unchanged from its original form, some twenty years ago. This stubborn neglect has really come back to bite them this year as browsers are dropping support for Flash, which the site still relies upon heavily.

NeoQuest had a lot of potential

Neopets has also failed to adopt modern (ok, not even that modern) web standards such as HTTPS, HTML5, responsive design, source code minification and dynamic content (AJAX). NeoQuest is one of the games that suffers the most from this - an RPG where every movement or action triggers a full page load!

TNT has just launched a Mobile Beta, to make the site more accessible from mobile devices. Better late than never I guess!

Over the years there have been various attempts to update much of the site's artwork. For example, many images - including those of the Neopets themselvs - have been redrawn. While I can totally understand the need to standardise the Neopet poses, and I think the new art has been mostly faithful to the originals, these changes have not been to everyone's tastes, and have often taken on a more childish aesthetic. 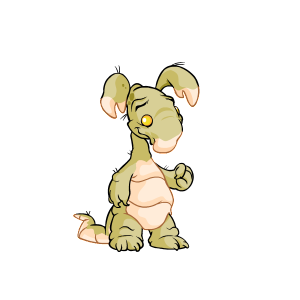 Mutant Blumaroo - Before and After

Other changes include "revamping" some of the classic dailies, often in totally undesirable ways. Fruit Machine is a good example; once a one-click activity, now the player must physically wait for the slot machine "cards" to stop spinning. Perhaps this was a cack-handed attempt to deter cheaters from auto-playing the game, but it is frustrating and tedious for legitimate players. What's more, the new animation doesn't even make sense, as it depicts pets holding up paper cards containing moving images!

Features deemed too old or problematic have simply been retired, resulting in an ever-expanding Game Graveyard. It is common on Neopets to see features retired, but this is troublesome for players because it often results in trophies, items and avatars becoming unobtainable.

While many features have received such updates, other features that are in dire need of work have been left to rot. This has led to a feeling of inconsistency across the site; one minute, you're looking at a brand new page, and the next, you've been transported back to the early 2000s.

A lot of these old pages suffer from a lack of attention to detail, and they often contain glaring bugs or outdated information.

You will not receive your $GAME_COST Neopoints…

Many of the games on the site are just blatant advertisements. This really undermines all the impressive worldbuilding I mentioned before, and makes the site feel cheap.

Donna, one of the founders of Neopets, has since expressed her frustration at how much developer time was dedicated to producing these sponsored games:

Let's just say we weren't fans of most of Neopets' resources being spent creating 'wheel of spinbrush' or some other sponsor game rather than actually on making the core game better.

Obviously the site has to make money somehow, but I would argue that a means such as Neopets premium (despite being a bit of a pay-to-win scheme) is a much more player-friendly means of generating income.

Runescape, another popular game of the same era, used this same model to great effect.

Here are just a few examples…

Pyramids is a very straightforward card game where the player must try to clear a pyramid of cards by picking up numbers that are one higher or one lower than the next one in the stack. When the stack runs out, it's game over. There is no challenge here - a child could play this in their sleep.

To win a gold Pyramids Bonus trophy, you just need to win 2 games in a row. Sounds easy, right? Wrong. Here are my *ahem* friend's stats after leaving a script to auto-play the game for a week straight:

Others in the community have made similar calculations.

If each game takes one minute to play (a conservative estimate), then this means it would take, on average, nearly 22 hours to win the trophy. 22 hours of non-stop, mind-numbing clicking.

NeoQuest is a rudimentary RPG, and at the time it was probably state-of-the-art. Now it feels slow and clunky, and, while it's more exciting than Pyramids, it contains long periods of monotonous, repetitive grinding.

The game must be played in full three times to win a gold trophy, and each time the difficulty spikes. On the hardest difficulty, the player is well and truly at the mercy of the random number generator, and a single death will send the player right back to the start of the game, potentially costing a solid 10+ hours of progress.

Its cousin, NeoQuest II, is similarly gruelling, but takes even longer to play. The ten fastest times on record range from 12-19 hours for the hardest difficulty, but six of these accounts are now disabled, so I would take these times with a pinch of salt.

Of course, some achievements should be difficult, or else they wouldn't be noteworthy. It is good for players to be rewarded for their accomplishments. However, when this difficulty stems purely from a high time cost or low odds, it quickly ceases to be fun and becomes frustrating or tedious instead.

These days I go by a simple rule of thumb:

If I can easily write a script to play a game for me, the game is probably not worth playing.

Cheating is a problem that has plagued the site since its infancy, and has gone largely unchecked.

I won't link to them here, but there exist entire communities dedicated to cheating in Neopets. There are scripts to autobuy rare items for reselling, scripts to automatically submit arbitrary high scores in the games room, and even long-running scripts that will automatically and optimally replicate every possible interaction with the site.

Autobuyers like this one are not hard to find

The prevalence of cheaters makes it almost impossible to win most game trophies legitimately. The scoreboards are consistently filled with the highest conceivable scores, because years of experience has taught the cheaters exactly what they can get away with. This leads me to believe that a significant proportion of high-profile players are cheating. Sure enough, many of the top players have been frozen over the years for this exact reason.

A cynical part of me wonders if TNT actually turn a blind eye to this behaviour, because the existence of these prominent elite players provides an added incentive for the humble masses. Besides, any interaction with the site - real or fake - is going to increase the perceived popularity of the site, and thus generate increased ad revenue.

This Morphing Potion can be resold for millions of Neopoints

Restocking is the practice of repeatedly refreshing one of the official shops until it restocks with rare items, and then buying them as quickly as possible. These items can often be sold for an enormous profit, but their supply is very limited. When asked how anyone manages to succeed in restocking, one player gave this sobering response:

Bots. You are competing with bots.

One user known as "SiR CRaCK AL0T" claims to have once been making "over $300 a month" from the use of bots, by accumulating millions of Neopoints and selling them for real money.

Not only have TNT left the door wide open to cheaters, but they have also been the target of many embarrassing and calamitous hacks:

All of these hacks could have been prevented with better security practices, such as two-factor authentication, sanity checking of inputs and not storing user passwords in plain text.

There have been some other famous glitches in Neopets history. They are not related to security, but they are included here nonetheless as a matter of interest.

Each of these items was once worth millions

Many features in Neopets rely on there being a large player base, for example, player-owned shops. These are one of the primary ways of finding items, and also a crucial source of income for many players. As the player base dwindles, the economy stagnates, items become harder to sell, and prices either rise due to a lack of competition, or plummet due to a lack of buyers.

Players can price their items as they please

Sadly this is a vicious circle: players leave, which makes the game worse, which causes more players to leave.

I fear Neopets is also not very accessible to new players. The site appears dated and childish, and its vastness can be overwhelming. And having to compete with players who have been around for decades (who may or may not be cheating), can be disheartening; it is basically impossible for new players to catch up, especially since many trophies and avatars are now retired and thus forever out of reach.

The Economy is Ruined

This is a complex subject, and as we have seen, it has been covered many times, but I will try to summarise some of the main problems.

Neopoints have drastically decreased in value over the years due to the fact that they are constantly entering the economy, and rarely leaving.

This has made some of the older games on the site more or less redundant. Sure, I could spend a couple of hours to make 5000 NP playing Pyramids - or I could play a newer game like Kass Basher and earn 3000 NP in a matter of minutes.

Trudy's Surprise is further evidence of - and perhaps a contributor to - this inflation. Added seemingly as a last-ditch attempt to keep players coming back to the site, it gives out a whopping 20,000 NP a day (or thereabouts) just for clicking a button!

Much like the real world economy, most of the wealth is owned by a tiny percentage of players. One article estimates that:

Roughly a tenth of the population has half of the Neopoints.

Of course, there are areas of the site where all players are on an equal footing, such as the creative competitions and even the games room, but many activities revolve around accumulating and spending Neopoints. It is well-known that the rich get richer. Ultimately, this means that it is almost impossible to make any meaningful progression in the game.

I recently estimated the cost of collecting all unretired avatars to be around 2.6 billion Neopoints. Even for a player earning 100,000 NP a day, this would take 71 years to achieve.

It is clear that Neopets has its share of problems, but despite everything, the game lives on to this day, backed by a strong and loyal community.

So how can this game be salvaged?